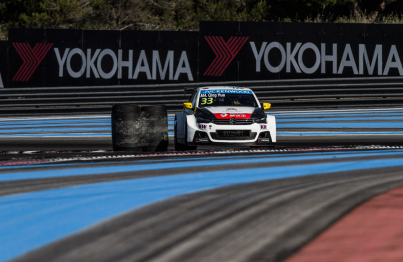 The year started off with intense action in home soil for the defending Champion in Argentina. A precursor of what would eventually be the final standings in the FIA WTCC Championship. Race 1 offered a top spot for Citroen and the Argentine driver José María “Pechito” López with Yvan Muller following and the rally legend Sébastien Loeb taking third place on the podium. Michelisz and Bennani also threw the gauntlet to the YOKOHAMA trophy at this early stage in the Championship and Monteiro and Tarquini brought some initial hope and glory to Honda.

The Championship travelled from South America to the North African country of Morocco, only a stone’s throw away from Europe. Again the Citroen Trio plus Ma, dominated and Bennani continued progressing making use of a good 4th place overall to lead the YOKOHAMA Trophy.

The third racing weekend of the Championship went to Hungary and the well known circuit near Budapest, famous for hosting the first Formula 1 Grand Prix behind the Iron Curtain in 1986. Thousands flock every year to the race in support of their national hero, Norbert Michelisz and he did not disappoint them with a win in Race 2. López continued his winning ways, with victory in Race 1 and Monteiro kept the flag waving for Honda.

One of the mayor highlights of the FIA WTCC Championship, which has YOKOHAMA as Official Tyre supplier was the much awaited race in May at the “Green Hell”, Nürburgring’s Nordschleife. In Race 1 López, Loeb & Muller delighted the fans and themselves with the experience and Monteiro again picked up points for Honda. Michelisz consolidated his lead in the YOKOHAMA Trophy.

Russia’s Moscow raceway followed and Lada, hoped to make its mark at home with the spectacular looking Vesta. Huff delivered a 2nd and 4th place and his team colleague Catsburg also got into a credible 4th to stimulate Lada’s expectations further.  Michelisz of Zengo Motorsport continued his successful performances in the independent’s category which is supported by the Japanese Tyre manufacturer.

Half way in the season, there were no surprises at the Slovakiaring with the big 3 displaying top form and Huff keeping the Russian spirits alive.

The attractive track of Le Castellet in France also saw little change at the top, with Sébastien Loeb, achieving a triumphant victory run in Race 1 and López close behind, strengthening his lead further. Once again Michelisz was too strong for his competitors in the YOKOHAMA Trophy.

The street circuit in Portugal’s Vila Real followed in July with the López/Muller head to head.

The Championship then left Europe for the Asian rounds. Japan’s Twin Ring Motegi set the scene for a little “more of the same” with the best at the top, and some excitement with the YOKOHAMA Trophy.

Shanghai in China and Buriram in Thailand were next again, with no surprises and in fact López’s consistency crowned him in Thailand allowing him to achieve his 2nd consecutive World Championship in style.

The final race of the FIA WTCC took place in Qatar, with the first ever night race at the World Touring Car Championship. The highlight was the fierce competition for the YOKOHAMA Trophy between Norbert Michelisz and Mehdi Bennani. In the end, the Hungarian managed the Trophy with 4 points clear. The night race also proved exciting to determine final overall positions, which resulted in Yvan Muller narrowly beating Sebastian Loeb to earn 2nd place.