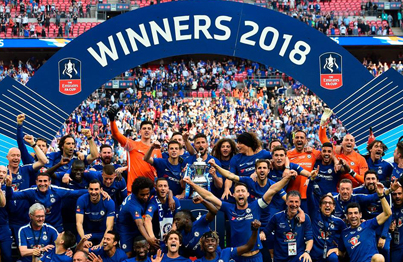 YOKOHAMA is pleased to announce that English Premier League football club Chelsea FC, with which the Company has an official partnership relation, won the England Football Association’s Emirates FA Cup on 19th May 2018.

The FA Cup is the world’s oldest football tournament, open to amateur as well as professional clubs in England. Chelsea FC captured its eighth FA Cup and first in six seasons by defeating Manchester United 1-0 in the final match at Wembley Stadium on 19th May 2018.

Chelsea’s victory in the FA Cup competition follows its victories in the FA Women’s Cup and the FA Youth Cup (U-18), the first time in history these three competitions have been won by the same football club in one season.

YOKOHAMA aims to raise global awareness of its YOKOHAMA TYRES brand as it seeks to expand sales around the world. As a global player in its field, YOKOHAMA, like a major sports team, is constantly refining the skills and techniques of its employees who, like athletes, work together as a team to engage in wholesome competition with rivals from around the world. With this shared sense of working as a team to meet the challenges from competitors, YOKOHAMA was eager to partner with the Chelsea FC, another world-class organization with a worldwide fan base. YOKOHAMA and the Chelsea FC thus entered into a five-year partnership commencing with the start of the 2015‒16 season.