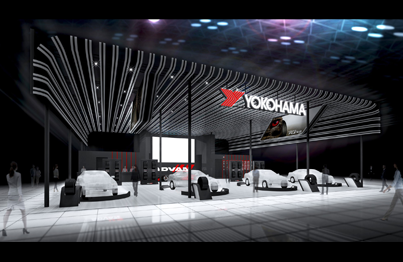 Tokyo – The Yokohama Rubber Co., Ltd., announced today that it will again participate in Japan’s annual celebration of the custom car, the “Tokyo Auto Salon 2017” to be held January 13–15 at Makuhari Messe. The YOKOHAMA exhibit will feature tires and aluminum wheel booths, with a special spotlight on the “ADVAN” global flagship brand.


To strengthen the “ADVAN” brand’s image as a high-performance tire, the tire booth will showcase two racing cars equipped with “ADVAN” tires—the 2016 championship car in Asia’s ultimate formula racing car series, the Japanese SUPER FORMULA Championship Series, which from 2016 is being run solely on “ADVAN” tires, and the KONDO RACING’s machine that won two races in last year’s Japan’s GT race, the SUPER GT GT500 class. Featured tire products will include the “ADVAN Sport V105”, YOKOHAMA’s global flagship tire; the “ADVAN A052”, a street sports tire; and the “ADVAN FLEVA V701”, a high-performance sport tire. Each of these featured tires will be displayed on a European- or Japanese-made custom car or tuning car, thus highlighting the “ADVAN” series’ superior technologies and high-performance and its suitability for use on high-performance cars from makers around the world as well as domestic models.


With 2017 marking the 100th anniversary of Yokohama Rubber’s founding, the YOKOHAMA exhibit will feature a display of some of its historically innovative sports tires. Responding to requests from visitors to past Tokyo Auto Salons, this year’s YOKOHAMA exhibit will include for the first time a corner selling “ADVAN” goods.

Visitors also will be able to enjoy talk shows featuring teams and drivers from the Japanese SUPER FORMULA Championship series and SUPER GT.