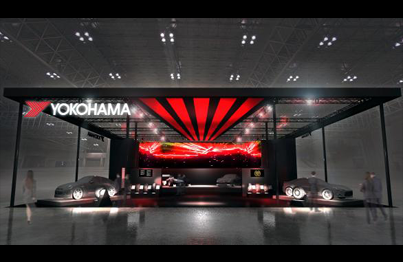 Tokyo – The Yokohama Rubber Co., Ltd., announced today that it will again participate in Japan’s annual celebration of the custom car, the “Tokyo Auto Salon 2018” to be held January 12–14 at Makuhari Messe. In addition to appealing to the “High-performance YOKOHAMA” brand image focused on the Company’s global flagship “ADVAN” brand, this time’s exhibit will also appeal to the “Rain-safe YOKOHAMA” image by displaying several tires with superior wet-grip performance. The YOKOHAMA exhibit will again have a tire booth and a wheel booth.

The tire booth will enhance the “ADVAN” brand’s image as a high-performance tire by showcasing the racing car that captured the 2017 championship in Asia’s ultimate formula racing car series, the Japanese SUPER FORMULA Championship Series, which was again run solely on “ADVAN” racing tires. Featured tire products will include the “ADVAN Sport V105”, which has been adopted as original equipment on several of the world’s leading premium car models; the “ADVAN dB V552”, which was launched in late 2017 as the most silent tire ever developed by the Company; and the “ADVAN HF Type D”, launched in 2017 as YOKOHAMA’s first tire targeted at the historic car market. Each of these featured tires will be displayed on a European- or Japanese-made custom car or tuning car, thus highlighting the “ADVAN” series’ suitability for use on a diverse variety of car types.

In addition to “ADVAN” tires, the “Rain-safe YOKOHAMA” theme will appeal to the Company’s considerable technological strength through the display of several tires in the “BluEarth” series of fuel-efficient tires that have received the Japan tire labeling system’s highest “a” grade for wet grip performance—including the “BluEarth-A,” which combines high performance with fuel efficiency. Visitors to the YOKOHAMA exhibit will be able to purchase a number of popular ADVAN goods. Scheduled on-stage events at this time’s Tokyo Auto Salon include talk shows featuring teams and drivers from the Japanese SUPER FORMULA Championship series and SUPER GT series who will share their experience running races on YOKOHAMA tires. Visitors will also be able to see videos introducing new YOKOHAMA tires on a large LED display.