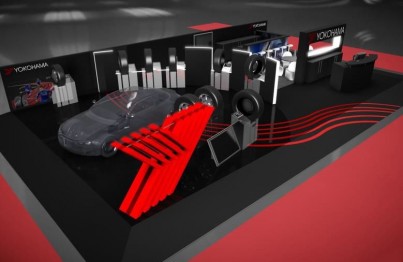 Tokyo - The Yokohama Rubber Co., Ltd., announced today that it will participate in the 2016 Geneva International Motor Show. The 86th edition of the show will be held during 3–13 March, with press days on 1–2 March.

The Company’s booth will appeal to YOKOHAMA’s latest cutting-edge tyre technologies, including the latest aerodynamics concept tyre with a new side fin design that controls airflow around the tyre to reduce fuel consumption and increase stability. The booth will also display a new concept tyre based on the latest technologies for reducing tyre weight.

Visitors will also be introduced to the “ADVAN Sport V105”, a global flagship tyre that has been adopted as original equipment on several of the world’s leading high-performance cars. Another tyre to be introduced will be “BluEarth-A AE50 CHELSEA FC EDITION”, which was developed in celebration of YOKOHAMA’s entering into a partnership agreement with the world-famous soccer team last July. The tyre bears the logo of the Barclay’s Premier League Champions Chelsea Football Club. To celebrate the launch of the tyre, first-team manager Mr. Guus Hiddink and Chelsea FC managing director Mr. Christian Purslow will attend the show and conduct Q & A session at the YOKOHAMA booth.

YOKOHAMA will hold two events at its booth, Booth No. 4231in Hall 4, as noted below.

1. Press conference, on 1 March at 16:15hrs, to announce the world premieres of new tyres.