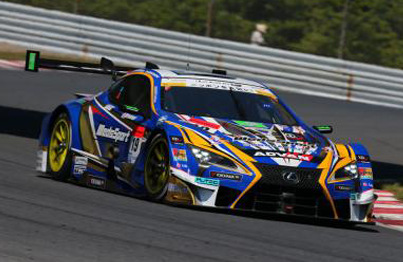 YOKOHAMA today announced its plans for supporting motor sports events in 2018. The Company’s support for motor sports in Japan and overseas contributes to the globalization of its tyre business and greater recognition of the YOKOHAMA brand. It also contributes to the growth, development and revitalization of the motor sports market and the automobile industry as a whole. YOKOHAMA looks forward to participating in many events again this year. This release provides a brief summary of the main events.

The WTCR is a touring car race being run under TCR technical regulations from 2018. YOKOHAMA was named the WTCR’s official tyre supplier for 2018–19 in recognition of our support for the series predecessor, the FIA World Touring Car Championship (WTCC), for 12 consecutive years from 2006. We will supply 250/660R 18 size ADVAN A005 tyres for use on dry tracks and the same size ADVAN A006 for running on wet tracks during the series’ 10 planned races, with participating drivers first staring their engines in Morocco. In addition to the WTCR, YOKOHAMA will be supporting numerous other racing series using TCR regulations in 2018, including regional series, such as TCR Europe and TCR Middle East, and national series, such as TCR UK, TCR Portugal, and TCR Benelux.

YOKOHAMA’s ADVAN racing tyres will be the control tyres for the Japanese SUPER FORMULA Championship, Asia’s ultimate Formula racing series, for a third straight season in 2018. This year we will supply tyres with two different specs, adding a soft-compound ADVAN tyre to the medium-compound tyres provided in previous years. We look forward to a year of exciting and highly competitive races, with participating teams adopting a variety of racing strategies. The control tyres are the same as last year, with the ADVAN A005 for use on dry tracks and the ADVAN A006 for wet tracks. Sizes also are the same—250/620R13 for front tyres and 360/620R13 for the rear.

We are proud to continue the relation begun in 2011 and supply our ADVAN racing tyres as the control tyre for the Japanese Formula 3 Championship, Japan’s longest continuously running motor racing series. We will supply the ADVAN A005 for use in races run on dry tracks and the ADVAN A006 for use on wet tracks. The supplied tyre sizes will be 200/50VR13 for front tyres and 240/45VR13 for rear tyres.

Japan’s Super-FJ Formula racing series is a domestic regional championship established by the Japan Automobile Federation (JAF). The Super-FJ includes several highly competitive multi-race regional series held at the seven major circuits in Japan, from Tohoku in the north to Kyushu in the south. This year marks the ninth straight year since 2010 that we will be supplying ADVAN racing tyres for the Super-FJ races. We remain committed to supporting the full gamut of formula-car racing in Japan, from entry-level races to the top-level races.

Super GT races are contested in two classes, GT500 and GT300. GT500 is dominated by works teams from major automakers while GT300 teams tend to be more varied and individualistic. GT500 machine specifications are being brought in line with the regulations of the Deutsche Tourenwagen Masters (DTM, German Touring Car Masters) series that began in 2014, and since 2017 all racing teams are entering machines that meet the new regulations, including reduced downforce. GT300 races feature competition by a variety of cars made in Japan and overseas. The machines can broadly be divided into three types: (1) automakers’ production cars that meet the international FIA GT3 specifications, (2) unique JAF-GT machines, and (3) the so-called “Mother Chassis" group of machines.

In this year’s GT500 races, we again will be supporting the three teams we sponsored in 2017—KONDO RACING’s Forum Engineering ADVAN GT-R, and LEXUS TEAM WedsSport BANDOH's WedsSport ADVAN LC500, and TEAM MUGEN’s MOTUL MUGEN NSX-GT. In the GT300 class, we will sponsor numerous teams, including last year’s champion, GOODSMILE RACING & TeamUKYO, which captured the title with its GOODSMILE HATSUNE MIKU AMG running on YOKOHAMA tyres. In this class, teams running on YOKOHAMA tyres won two consecutive titles. We look forward to a car running on YOKOHAMA tyres continuing our championship streak. The Super GT series will again consist of eight races, including one in Thailand. All are expected to thrill huge crowds of avid racing fans.

The Japanese Rally Championship will feature 10 races in 2018. YOKOHAMA will provide teams with a range of tyres appropriate to the course conditions of each race, centering on ADVAN A052 for races run on tarmac-paved roads and ADVAN A053 for gravel.
In 2017, the JN2 class champions—driver and navigator (co-driver)—rode to victory on YOKOHAMA tyres. Teams supported by YOKOHAMA also turned in outstanding performances in the series other classes, including the ultimate JN6 class, where the team of Toshihiro Arai and Naoya Tanaka took second place while Fumio Nutahara and Tadayoshi Sato finished third. In 2018, we will again support teams vying for the championship in many classes. In the JN6 class, the Fumio Nutahara/Tadayoshi Sato combi will compete in a machine adorned in the ADVAN colours.

YOKOHAMA again will supply its GEOLANDAR tyres for SUVs to teams participating in off-road races around the world, including the desert races in North America and the Asia Cross Country Rally in Southeast Asia.

YOKOHAMA again will support teams competing in the OK class of the All Japan Karting Championship, the country’s premier kart racing series. In 2017, three karts were fitted with YOKOHAMA tyres, and a driver of these karts stood on the podium at the end of the seventh, eighth and tenth races of the series. This year five teams will be racing on YOKOHAMA tyres, and we look forward to working together with the teams and drivers to achieve victory.
In addition, YOKOHAMA will again support the FP-Junior Cadets category of the Japanese Junior Karting Championship by providing the control tyres. This year’s control tyre will be the new ADVAN SLJ, which we began marketing in January 2018 specifically as a dry-surface tire for Cadets class karts.
Overseas, we again will be supplying the control tyre for the Asian Karting Open Championship as well as tyres for circuit races in the Philippines and other countries.

YOKOHAMA continues to be an enthusiastic supporter of racing teams competing in events across all motor sports categories and in countries around the world. The data gathered from
the use of YOKOHAMA tyres under the demanding conditions of motor sports contributes to our development of tyres for everyday drivers around the world. News updates and results of many of the races noted above will be posted on YOKOHAMA’s motor sports web site (http://www.y-yokohama.com/cp/global/motorsports/) as well on the Company’s official Twitter site (https://twitter.com/YRC_Global), and the Yokohama Rubber Channel on YouTube (http://www.youtube.com/TheYokohamaRubber/).