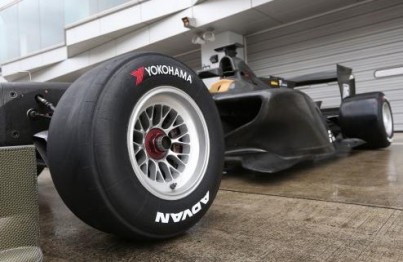 Tokyo - The Yokohama Rubber Co., Ltd., announced today that its “ADVAN” racing tire had been selected as sole control tire for the Japanese SUPER FORMULA Championship Series from 2016. The supplied tires will be the “ADVAN A005” for use in dry conditions and the “ADVAN A006” for use in wet conditions. Both tires use YOKOHAMA’s proprietary Orange Oil compounding technique to achieve outstanding environmental performance while ensuring superior grip performance. The control tire sizes will be 250/620R13 for front tires and 360/620R13 for rear tires (Note: 250 and 360 refer to tire width and 620 to the outer diameter size, both in millimeters).

The Japanese SUPER FORMULA Championship Series is Asia’s highest level racing series for formula cars, the purest form of racing car. The series began in 1996 as the Japanese Championship Formula Nippon series and was relaunched in 2013 as the Japanese Championship Super Formula in recognition of the series’ growing reputation around the world, especially in Asia. Yokohama Rubber has been an enthusiastic supporter and participant in formula car races in Japan since 1980’s All-Japan Formula 2 Championship series. The Company also began participating in the All-Japan F3000 Championship in 1987. YOKOHAMA participated in the initial Formula Nippon series in 1996, but a different tire maker began supplying the control tires in 1997. In 2016, Japan’s top formula car racing series will be run on YOKOHAMA tires for the first time in 20 years.