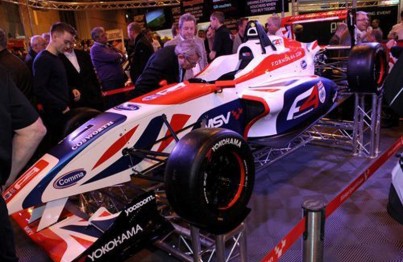 he Japanese manufacturer of high performance and motorsport tyres, YOKOHAMA, will have a prime position at this year's Autosport International show at the NEC on 9-12 January 2014. The company has exhibited at what is widely regarded as the industry-leading motorsport and aftermarket event for decades and will celebrate its products and motorsport heritage in the UK.

The company will, of course, have the full complement of YOKOHAMA tyres on display; its ADVAN competition tyres, for circuit and rallying as well as its wide range of products for road and off-road use. These include the award-winning flagship ADVAN Sport V105 tyres and the highly acclaimed BluEarth products. Also featuring on the stand will be SUV, 4x4, winter and light commercial tyres.

The centrepiece of the YOKOHAMA stage will be the BRDC Formula 4 car, which will run for its second season, again on YOKOHAMA control tyres, in 2014. The first season was a resounding success and early indicators suggest 2014 will be even more so, with identical cars providing a crucial stepping-stone for aspiring single-seater race drivers.

YOKOHAMA can be found on stand No. 2740 in Hall 20 of the NEC for the duration of the four-day event.