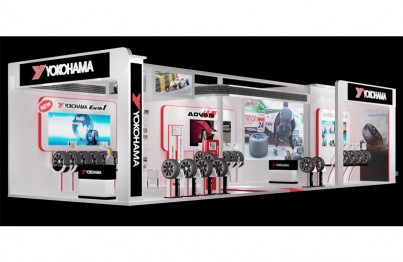 Yokohama India Pvt. Ltd. will be one of the exhibitors at India’s 12th Auto Expo 2014 The Motor Show, to be held 5–11 February (press days on 5–6 February) in Greater Noida. This year will mark Yokohama India’s fourth straight appearance at the expo since it first exhibited in 2008. India’s Auto Expo, the nation’s largest motor show, is held every other year.

The YOKOHAMA booth will introduce visitors to a variety of YOKOHAMA tyres, starting with the “YOKOHAMA Earth-1,” a tyre developed specifically to meet the demands of drivers and roads in India. YOKOHAMA’s global flagship brand “ADVAN,” the “GEOLANDER” series for SUVs, and the “.drive” series, a core overseas brand, will also be featured as the booth appeals to the broad line-up of tyres YOKOHAMA will be offering to drivers in India. The booth will also appeal to the high performance and cutting-edge nature of YOKOHAMA tyres by introducing visitors to the new size “ADVAN” racing tyres being supplied to the FIA World Touring Car Championship (WTCC), which is being run under new technical regulations from 2014, and to “fin tyres”, developed by YOKOHAMA to help advance the next generation of motorization and featuring a design that reduces the vehicle’s air drag by controlling the airflow in the wheel well.

Since its establishment in April 2007, Yokohama India has been engaged in marketing activities and network-building in preparation for an expected steady growth in demand in the Indian market. The company is currently constructing a passenger car tyre plant in the Indian state of Haryana, near Delhi. With the plant scheduled to begin production this year, Yokohama India looks forward to strengthening its ability to supply and market YOKOHAMA tyres in India.

The previous Auto Expo, held in 2012, attracted 1,500 exhibiting companies from 25 countries. This year’s expo will be even larger, with two concurrent shows, the Motor Show and the Auto Components Show, being held at different sites for the first time. Participating exhibitors represent more than 30 countries.