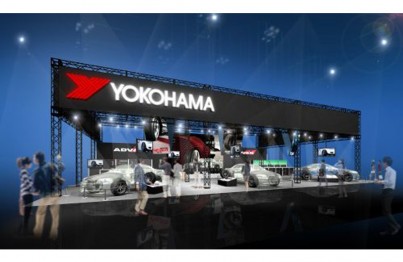 Tokyo - The Yokohama Rubber Co., Ltd., announced today that it will participate in Japan’s annual celebration of the custom car, the “Tokyo Auto Salon 2014 with NAPAC” to be held 10th-12th January at Makuhari Messe. The YOKOHAMA exhibit will showcase the high performance of the company’s global flagship brand of “ADVAN” tyres, with a special focus on further penetrating the dress-up user market and enhancing the brand’s appeal to younger drivers. The YOKOHAMA booth will also feature YOKOHAMA aluminium wheels, popular with drivers who like to dress up their rides.

The exhibit’s tyre booth will highlight several core products in the “ADVAN” line-up, including the “ADVAN Sport V105,” which is targeted at high-power premium cars and has been selected as original equipment on several of the world’s leading high-performance cars.

The street sports tyre “ADVAN NEOVA AD08R” and the premium comfort tyre “ADVAN dB” will also be prominently displayed. The stylishness of the “ADVAN” will be readily viewable on demo cars equipped with the tyres, and the series’ high performance will be prominently featured throughout the booth, especially via the display of the GT500 class “D'station ADVAN GT-R” racing car that competed in the 2013 SUPER GT series on “ADVAN” racing tyres.

In addition, the YOKOHAMA booth will hold lotteries that award “ADVAN” goods to lucky booth visitors. It also will feature a concierge counter where visitors can get advice on the tyres and wheels best-suited to their preferences.

The aluminium wheel booth will introduce visitors to YOKOHAMA’s high-grade “A.V.S.” series and the sporty “ADVAN Racing” series, with the spotlight on new models and sizes scheduled for sale in 2014.

Tokyo Auto Salon has been held every year since 1983. In 2013, the event featured an all-time high 450 exhibiting companies and drew more than 280,000 visitors. In 2014, expanded exhibition space will make Tokyo Auto Salon one of the world’s largest custom car events.