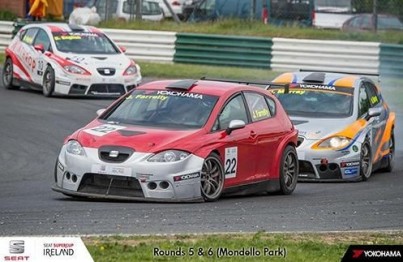 The UK distributor for Japanese high performance and motorsport tyres, Yokohama HPT Ltd., has added several new motorsport series to its portfolio for 2016. In addition to maintaining its extensive range of championships using YOKOHAMA as control tyre, it will add several key, high profile series in the UK and Eire.

New additions to the YOKOHAMA portfolio of one-make series include the Alfashop Alfa Romeo Championship, which runs as part of the BRSCC package. The three-class structure sees a wide range of models from the iconic Italian manufacturer as well as huge grids at circuits across the UK. YOKOHAMA´s involvement as control tyre will be managed by retailer Black 'n' Rounds.

Another series to make the move to YOKOHAMA tyres for 2016 is the K-Tec Clio 182 Championship, which runs within the 750 Motor Club programme. This series is based on identical models of the Mk2 Clio 182 and is designed to help drivers progress in a cost-effective manner and will be supported by PolleySport.

In the Republic of Ireland, after a successful season on YOKOHAMA and running as a category of the Irish Touring Car Championship, the SEAT Supercup Ireland will run as a distinct series in 2016. These 'Supercopa' cars will all use YOKOHAMA ADVAN A005 and A006 dry slick and wet tyres respectively. The 12-round series in 2016 will take in three venues in Ireland, including the impressive Mondello Park facility.

In fact, the Japanese manufacturer's relationship with Mondello Park will become closer in 2016, with two series running exclusively at the circuit also adopting YOKOHAMA as control tyre. The existing Fiesta Championship as well as the new-for-2016 Fiesta ST Championship will both run on YOKOHAMA ADVAN A048 throughout 2016 and 2017.

Both the SEAT Supercup Ireland and the two Fiesta series will be supported by YOKOHAMA'S Republic of Ireland distributor, Murray Motorsport.

These new series are in addition to the huge range of championships that already use YOKOHAMA as control tyre. In circuit racing, the Sports 2000 series will use a new size of ADVAN A005 and A006 slick and wet tyres, while the Caterham Graduates will again use YOKOHAMAS, for the ninth year.

The AR Motorsport Morgan Challenge remains on YOKOHAMA tyres, a relationship which has led to the adoption of YOKOHAMA tyres on the manufacturer's latest limited edition road car as Original Equipment.

In addition to the Clio 182 Championship, several other 750 Motor Club series remain using YOKOHAMA, including the Stock Hatch, RGB and LoCost series.

North of the border, the Mini Cooper series continues its relationship with YOKOHAMA, as does the XR2 Fiesta series and Scottish Formula 1000 Junior Rally Championship. The English version of the same series also continues to use YOKOHAMA ADVAN A048 tyres. Staying on loose surfaces, both the Junior and Senior Suzuki Swifts and the RX Racing buggies in the MSA British Rallycross Championship will use YOKOHAMA.

In oval racing, YOKOHAMA will continue its long relationship with BRiSCA and provide ADVAN A021R tyres to the entire Formula 2 field, as well as the Lightning Rod and Stock Rod runners. This relationship will continue to be successfully managed through dealer, PolleySport.

This approach to supporting local motorsport helps the YOKOHAMA brand to create a bottom-up strategy to motorsport, with presence and support from grass roots to the highest levels of the sport, including the FIA World Touring Car Championship, where it has been control tyre since 2005.

Commenting, Head of Motorsport at YHPT Ltd, Mark Evans, said; "I am very excited looking ahead to the 2016 motorsport season. The adoption of the new championships to compliment our existing series' is a fantastic testament to the image of our tyres, their performance and the support offered by our dealers.

"It looks as if we will have a very busy year in Ireland, with the SEAT Supercup Ireland becoming a standalone series after its pilot season last year. Along with the two classes of the Fiesta series at Mondello Park, I think Murray Motorsport is going to be very busy!

"I am also delighted to be continuing our relationship with so many race series, which have partnered with us for decades, in some cases. I think that the combination of product and service is appreciated by organisers and competitors alike and in the case of Morgan, where our tyres were chosen as OE fitment on the AR Plus4, manufacturers also."