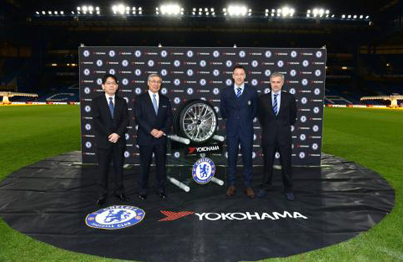 Tokyo - The Yokohama Rubber Co., Ltd., and the prestigious English Premier League’s Chelsea Football Club have announced signing a sponsorship agreement on February 26th at 19:30 in London (local time). The contract period is for five years from July 2015 and the agreement will enable the display and the wear of the YOKOHAMA logo on the official football shirt, YOKOHAMA branding at the stadium, etc., use of logo and players and coach of Chelsea FC to tire-related various advertising and promotional materials. With this agreement, Yokohama Rubber aims to improve its brand awareness and reach out to society as it continues its expansion on a global scale as set in Phase IV of the company’s medium-term management plan Grand Design 100.

Chelsea FC is a prestigious football club in the English first division (Premier League), founded in 1905 (founded 110 years ago). Its home ground is in London (home: Stamford Bridge). The Club’s achievement through history has seen it crowned Champions of England 4 times. As well as being the proud winner of 7 FA Cups. Internationally the Club was the winner of the UEFA Champions League in the 2011-2012 season. Chelsea FC is a world leading football team that also won the UEFA Europa League in the 2012-2013 season. Currently in the 2014-2015 season Chelsea FC is also at the top of the Premier League and it has advanced to the knockout stages of the UEFA Champions League.

Chelsea FC had previously experienced European success in 1971 and 1998, winning the European Cup Winners' Cup. It is the only English club to have won all three major UEFA club competitions. In addition to possessing some of the world’s most recognizable players, Chelsea is coached by Jose Mourinho, one of the most successful figures in the game. Chelsea has also invested in its future with a state-of-the-art Academy and training centre in Cobham, Surrey. Since its opening in 2007, the club has reached five FA Youth Cup finals, lifting the trophy three times. Additionally, the Chelsea Foundation boasts one of the most extensive community initiatives in sport, working in 30 countries around the world, helping improve the lives of more than 900,000 children and young people each year.

Yokohama Rubber, founded in 1917, is engaged in the manufacture and sale of tires and a variety of products in its Multiple Business segment, including high-pressure hoses, sealants, marine hoses, and golf equipment. In fiscal 2014 (ended December 31, 2014), the company recorded consolidated net sales of 625.2 billion yen, with tires accounting for 497.6 billion yen of the total. Yokohama Rubber operates 13 tire plants (not including those currently under construction) in eight countries around the world and employs about 20,000 people globally.

In 2015 Yokohama Rubber has started Phase IV (Jan. 2015 - Dec. 2017) of the company’s medium-term management plan, Grand Design 100. Grand Design 100 began in 2006 and it is divided into three year periods with a total of four phases. Phase IV is the final chapter. The theme for Phase IV is “All for Growth - Focusing our Energy on Growth -”. Yokohama Rubber will maximize customer value and expand our global scope with an eye to remaining a leader in the tire and rubber industry for another 100 years. The basis of the idea is to globally expand to net sales to 770.0 billion yen with an operating income of 80.0 billion yen and an operating profit margin of 10.4% by 2017.