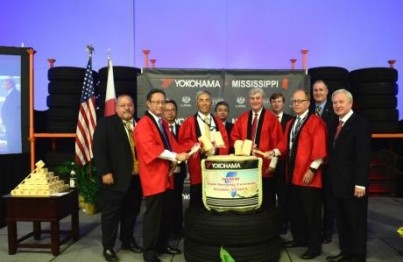 Tokyo — The Yokohama Rubber Co., Ltd., announced today that its US tire manufacturing subsidiary Yokohama Tire Manufacturing Mississippi, LLC (YTMM), has completed construction of a new truck/bus tire plant, the opening ceremony for which was held on October 5. The ceremony was attended by some 300 invited guests, including Yokohama Rubber President Hikomitsu Noji, Mississippi Governor Phil Bryant, Congressman Trent Kelly, Consul General Masami Kinefuchi from Japan's consulate in Nashville, Tennessee, as well as representatives from the Mississippi state government, local universities, US executives from Japanese automakers as well as others from the automotive industry, and YTMM suppliers.

In his opening ceremony speech, Yokohama Rubber President Hikomitsu Noji emphasized the importance of the new plant and thanked all the guests for bringing it to an early fruition, saying "You should know just how much this new plant means to us. Our industry is positioned for solid growth, and we had to move fast. We could no longer sit on the sidelines, without our own state-of-the-art manufacturing facility right here in the United States. Your incredible support and efforts helped make this possible. You gave us everything we needed, and now, a mere two years after we did the groundbreaking on this beautiful 500-acre site, we are ready to make the tires that will keep America’s trucks rolling down the road and the economy moving.”

Yokohama Rubber announced it would build a truck/bus tire plant in West Point, Mississippi, in April 2013, and in May of that year established YTMM to oversee construction of the plant it would operate upon completion. Construction of the plant began in September of the same year. Yokohama Rubber invested US$300 million in the new plant, which has an annual production capacity of up to one million tires. The plant is situated on a 500-acre site (about 200 hectares), and the Company plans to build additional facilities on the site in line with US demand.