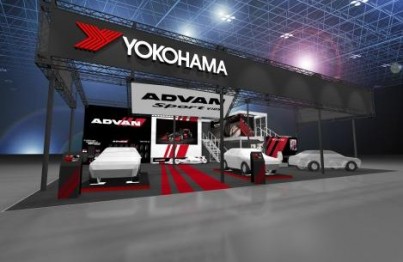 Tokyo - The Yokohama Rubber Co., Ltd., announced today that it will again participate in Japan’s annual celebration of the custom car, the “Tokyo Auto Salon 2016” to be held January 15-17 at Makuhari Messe. The YOKOHAMA exhibit will showcase the Company’s tires and aluminum wheels, with a particular emphasis on the high performance of “ADVAN” global flagship brand.

The tire booth will appeal to the “ADVAN” as a high-performance tire by showcasing two racing cars equipped with “ADVAN” tires. The first is a machine competing in Japan’s top formula racing car category, the Japanese SUPER FORMULA Championship Series, which is run solely on “ADVAN” tires. The second is a machine competing in Japan’s GT race, the SUPER GT. Appealing to the advanced technology and superb drivability of the “ADVAN Sport V105,” the display will also include European- and Japanese-made dressed-up and tuning cars featuring the tires. The display will communicate the strong appeal and suitability of the "ADVAN Sport V105" tire for use on a wide range of vehicles, including high-performance cars from makers around the world and domestic models. Visitors will be able to see all 15 tires in the “ADVAN” lineup, as well as a prototype of sport radial tire. The exhibit will also have a corner devoted to the Barclay’s Premier League champions Chelsea Football Club, with which YOKOHAMA entered into a partnership agreement in July 2015. On-stage events will feature drivers from the Japanese SUPER FORMULA Championship series and talk shows with SUPER GT racing team directors Ukyo Katayama and Masahiko Kondo as well as drivers Manabu Orido and Nobuteru Taniguchi. Visitors to the YOKOHAMA exhibit will also be able to purchase “ADVAN” erasures, which last year created a buzz on Twitter.

The Tokyo Auto Salon has been held every year since 1983. In 2015, the event featured exhibits by 414 companies and attracted an all-time high 309,649 visitors. With exhibition hours being extended to 8:00pm on Friday and Saturday January 15-16, attendance at the Tokyo Auto Salon 2016 is expected to surpass the 2015 record.