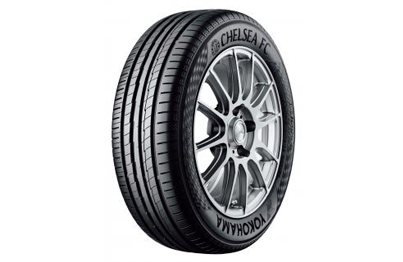 Tokyo - The Yokohama Rubber Co., Ltd., announced today that it will launch a tire called the “BluEarth-A AE50 CHELSEA FC EDITION” with the Chelsea Football Club logo on the sidewall. The tire commemorates the partnership with the Barclays Premier League champions Chelsea FC, which began in July 2015. Following release in Japan on October 29, the tire will be released gradually in Europe, Asia and South America, with methods of release differing from country to country. It will be available in three sizes: 225/45R17 94W, 205/55R16 91V and 195/65R15 91H.

The commemorative “BluEarth-A AE50 CHELSEA FC EDITION” tire was developed based on the high-performance, fuel-efficient “BluEarth-A AE-50”. The sidewall design was modified to include large, complementing logos of both YOKOHAMA and Chelsea FC, as a strong proclamation of their partnership. Like the BluEarth-A AE-50 from which it was developed, the new tire delivers excellent fuel efficiency along with maneuverability and handling.