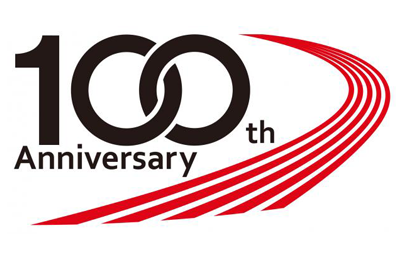 Tokyo – The Yokohama Rubber Co., Ltd., today unveils a new logomark that will be used during 2017, when the Company celebrates the 100th anniversary of its founding. The logomark will be used on a wide variety of items from January until the end of December. The logomark’s design expresses the Company’s pride in its 100-year history as well as its appreciation of its many customers, business partners, and other stakeholders around the world who have helped make this 100th anniversary possible.

Yokohama Rubber was established in Yokohama on October 13, 1917, as a domestic manufacturer of rubber products essential to the modernization of Japan. The Company has survived numerous challenges presented by changes in its external environment over the years – including the Great Kanto Earthquake, the Second World War, the 1965 economic recession and stock market crash, oil crises in the 1970s, the collapse of Japan’s 1980s bubble economy, and the financial crisis of 2008 – and has grown into a global enterprise.

Looking ahead to its 100th anniversary on October 13, 2017, Yokohama Rubber plans to create a new vision to herald the start of a second 100 years of growth as a company that manufactures products that help to enrich the lives of people around the world.

The 100th anniversary logomark features the “five red lines” that have become identified with the YOKOHAMA brand in a sweeping motif that expresses the Company’s fervor to work energetically toward a future beyond its 100th year. The interlinked zeros in the number 100 reflect Yokohama Rubber’s intention to work together with business partners, shareholders, and other stakeholders to ensure the Company continues to be a tire and rubber products manufacturer that meets customer needs over the next 100 years.