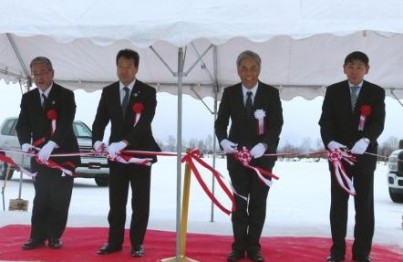 The TTCH is located on a 906,462m2 site that formerly was used as horse race track. Yokohama Rubber acquired the site in March 2015. In addition to a 1km-long straight snow track, the test course is equipped with a flat ice track, hill track, snow and ice circle, and a handling track. The course is able conduct tests with passenger cars running at speeds above 100kph, as well as braking, starting and acceleration tests with trucks and buses on a variety of road conditions, including winding and sloped roads. The TTCH is conveniently located just 15 minutes by car from the Asahikawa train station and 10 minutes from Asahikawa Airport. Winter temperatures stably below freezing will enable Yokohama Rubber to test the performance of its winter tires under severe winter conditions from the end-December to the end-February. During the rest of the year, the Company will use TTCH to test summer tires.

To date, Yokohama Rubber has tested its winter tires on self-owned courses in Japan and rented courses in Sweden. However, global expansion of the Company’s tire business has increased the number of items that must be evaluated and required increasingly sophisticated evaluation methods. The Company’s winter tire testing needs have outgrown the capacity of its existing T*MARY winter tire test course in Takasu Town, in Hokkaido’s Kamikawa County. The new TTCH facility is nearly four times the size of T*MARY.