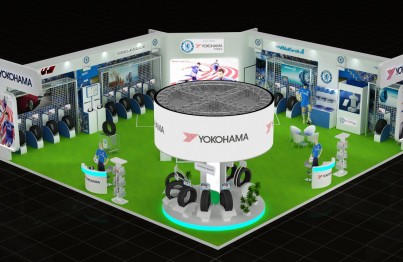 Tokyo - The Yokohama Rubber Co., Ltd., announced today that its Indian subsidiary Yokohama India Pvt. Ltd. will be one of the exhibitors at India's 13th Auto Expo 2016 - The Motor Show, to be held 3-9 February (press days on 3-4 February) in Greater Noida. Auto Expo, India’s largest motor show, is held every other year, and YOKOHAMA is participating for the fifth consecutive year dating back to 2008.

This year’s booth will feature the Barclay’s Premier League champions Chelsea Football Club, with which YOKOHAMA entered into a partnership agreement last July, and the “BluEarth-A AE-50 CHELSEA FC EDITION” tyre. The tyre’s design commemorates the partnership between YOKOHAMA and Chelsea FC, with the Chelsea FC logo on its sidewall.

Other products on display will include the global flagship brand “ADVAN”, the “GEOLANDAR” brand for SUVs, the sport tyre “S.drive”, and “YOKOHAMA Earth-1”, which has been developed especially for the Indian market.

In addition, YOKOHAMA’s flagship fuel-efficient tyre “BluEarth-1 EF20”, presently sold exclusively in Japan, will be displayed as a concept tyre to present YOKOHAMA’s advanced environmentally friendly technologies to the Indian market, where environmental awareness is on the rise.

Since its establishment in April 2007, Yokohama India has been engaged in marketing activities and network-building in preparation for an expected steady growth in demand in the Indian market. In November 2014, YOKOHAMA began local production at a passenger car tyre plant in the Indian state of Haryana, which lies next to the Indian capital of Delhi, and the Company plans to expand its sales and supply capabilities in India.