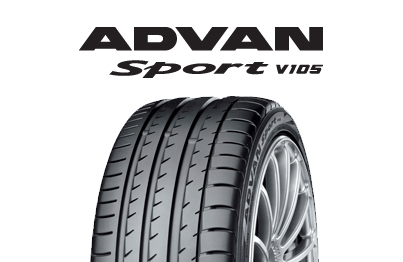 The Yokohama Rubber Co., Ltd., announced today that its “ADVAN Sport V105” tire has been selected by Germany’s Porsche AG as original equipment for its new 911, 718 Boxster, and 718 Cayman. The supplied tire sizes are as below.

The “ADVAN Sport V105” is known for its excellent driving performance and superior comfort and enhanced safety characteristics. The original equipped tire was developed together with Porsche and the “N0” mark on the side of each tire indicates Porsche’s approval of the tire.

The Yokohama Rubber Company Ltd was established in the City of Yokohama, Japan nearly 100 years ago. Since then, Yokohama has evolved and grown into a leading Global company with different business interests in a number of fields of which around 80% is the manufacturing of premium quality tires for all vehicles.

With a continuous commitment to create products that benefit society, using materials and processes which are environmentally and socially friendly, Yokohama will soon be celebrating 100 years of pioneering technology and innovations. This has been recognized through numerous prestigious international awards and also reinforced by the approval of the most prestigious car manufacturers (OEMs) in the world, who choose Yokohama as part of their Original Equipment (OE).

As one of the Global leaders in the tire industry, with Headquarters in Tokyo, Japan and its European Head Office in Germany, Yokohama has a network of Distributors across Europe and the World and facilities which are well spread around several continents. Yokohama also boasts highly advanced research and development centers in Japan as well as its own test circuits. The collaboration with top specialists and the know-how and expertise gained through time and from its Motorsport involvement at the highest levels of professionalism, continues to strengthen Yokohama internationally.

Relationship between Yokohama and Porsche

The relationship between Yokohama and Porsche is not new, with the first Yokohama tires installed by Porsche as factory equipment dating back to 1989. At the time the Porsche 911 (Type 964) was equipped with Yokohama A008P tires. Yokohama has subsequently supplied tires to Porsche for factory fitment on a long list of Porsche cars.

Motorsport is part of the Yokohama DNA and a central part in developing pioneering tire technology which supports the highest levels of motor racing and FIA Championships. As a result, racing teams, have also used Yokohama tires extensively with very good results on Porsche sports cars, especially at the 24 Hours of LeMans with podium successes and class victories. In the year 2000, Yokohama tires carried Team Taisan ADVAN’s Porsche 911 GT3R to the top of the GT class at LeMans. Other successes have included Seikel Motorsport’s Porsche 911 GT3R achieving top of the GT class in 2001, and Alex Job Racing’s Porsche 911GT3R to victory in the LM GT2 class in 2005.

Yokohama has supplied tires to racing teams for several Porsche sports cars including the 956 and 962C in multiple racing series.

With the latest announcement of the fitment of Yokohama ADVAN Sport V105 on Porsche’s latest models, the Japanese tire manufacturer continues to evolve and prepares itself for further progress to ensure its success well and beyond its first 100 years.