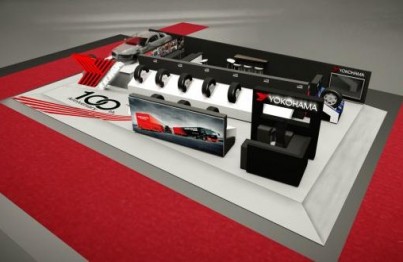 Tokyo—The Yokohama Rubber Co., Ltd., announced today that it will participate in the 2017 Geneva International Motor Show. The 87th edition of the show will be held during 9–19 March, with press days on 7–8 March. The Company will take the opportunity of the event to introduce the latest additions to its premium passenger car tire lineup, which it plans to unveil at the motor show site at a press conference at 14:30hrs on March 7. A number of other new products will also be on display at the site’s YOKOHAMA booth (no. 4231 in hall 4).

One of the main attractions of the YOKOHAMA booth will be its flagship “ADVAN Sport V105” tire, which has been adopted as original equipment on many of the world’s leading high-performance cars. The booth will also feature the “GEOLANDAR A/T G015,” an all-terrain tire for SUVs that was first introduced in 2016, and the “ADVAN A052,” a street sports tire. The display of various types of tires will demonstrate the YOKOHAMA brand’s appeal as high-tech, high-performance tires.

The booth will also have a corner celebrating YOKOHAMA’s partnership with the English Premier League’s Chelsea Football Club. This corner will feature a “BluEarth-A AE50 CHELSEA FC EDITION,” a special decorative tire with the Chelsea FC logo on the tire tread. This year, visitors will also be able to have their picture taken with “virtual” Chelsea FC players using a Yokohama Rubber–developed app based on augmented reality.