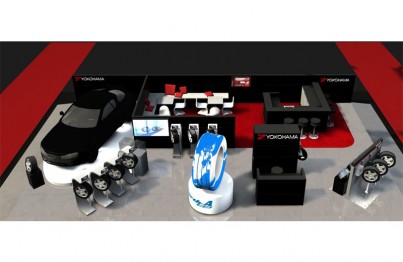 Tokyo – The Yokohama Rubber Co., Ltd., announced today that it will participate in the 84th Geneva International Motor Show to be held 4–16 March in Geneva, Switzerland (with press days on 4–5 March). The company’s exhibit will highlight the high performance of YOKOHAMA tyres, with a focus on the “ADVAN” global flagship brand and the fuel-efficient “BluEarth” brand. YOKOHAMA’s booth will also display the “AERO-Y” electric vehicle (EV) concept car and introduce the company’s cutting-edge technologies that will contribute to development of the next generation of motorization.

Featured “ADVAN” tyres will emphasize the brand’s high performance. In addition to the “ADVAN Sport V105,” which has been adopted as original equipment on several high-performance premium vehicles, and the street sports tyre “ADVAN NEOVA AD08R,” the booth will introduce visitors to the new size “ADVAN” racing tyres being supplied to the FIA World Touring Car Championship (WTCC), which is being run under new technical regulations from 2014. To demonstrate the broad sweeping nature of the YOKOHAMA tyre line-up, the booth will also feature a number of other YOKOHAMA brands. These will include the environmentally friendly “BluEarth” line-up, “BluEarth AE-01”; the “GEOLANDAR SUV” tyre, which employs “BluEarth” technology to raise the fuel efficiency of SUV tyres; and such winter tyres as “W*drive”, designed to meet winter conditions across the European continent, and the “iceGUARD” brand’s studless and studable tyres targeted at drivers in Northern Europe and Russia. Visitors will also be introduced to YOKOHAMA’s proprietary designed wheels, including the “ADVAN Racing RGIII”, “ADVAN Racing RS-DF”, and “ADVAN Racing RSII”.

The “AERO-Y” EV concept car brings together a wide range of the latest technologies developed by various units of YOKOHAMA. These include “fin tyres” that are designed to reduce the vehicle’s air drag by controlling the airflow in the wheel well, an ultra-lightweight yet high-strength body created from material developed by YOKOHAMA for use in aircraft components, and an adhesive technology that stems from the development of HAMATITE adhesives and enables the creation of composites from hard-to-bond dissimilar materials.

Invitation to Journalists: YOKOHAMA will hold a press conference on Tuesday, 4 March 2014, at 15:30 p.m., at booth 4231 in Hall 4, to unveil three new tyre products, including two world premieres and one European premier.